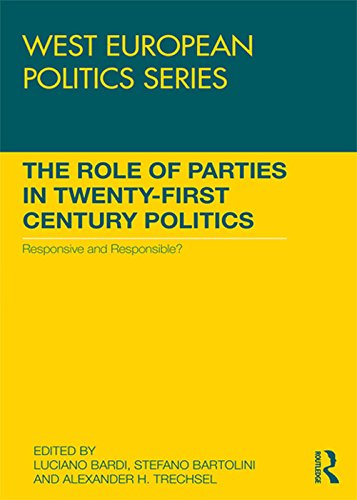 For a long time analyses of political parties were framed within the usual context of democracy and of the historical transformation of the forms of democratic government. More recently several authors, among which eminently Peter Mair, progressively began to question the relationship between the normative definition of democratic government and the actual operation of parties. These new concerns are well epitomized by the tension between ‘responsiveness’ and ‘responsibility’ that gives the title to this book.

While classic democratic theory sees as desirable that parties in government (and in opposition, too) are sympathetically responsive to their supporters first and more generally to public opinion and, at the same time, responsible toward the internal and international systemic constraints and compatibilities, these two roles seem to have become more difficult to reconcile and even increasingly incompatible.

The chapters of this book explore the tensions between responsiveness and responsibility decomposing the international sources from the domestic sources and discussing the options and the possibilities for political parties to continue to play the role of provider of political stability in rapidly changing domestic and international environments.

This book was published as a special issue of West European Politics.